"What if I Had Been There?"

As I sit on my back porch this morning, on the day before Easter, I began thinking about “What if I had there?”

As a believer, I would have been at the Gate of Jerusalem to welcome Jesus as He rode in on the donkey.  I can see the children waving the palm leaves and I can hear them singing “Hosanna”, their voices are so sweet and innocent.  Not yet marred by the sin and hatred that surrounded them.

I would have been in the crowd at His sham of a trial.  I would have been going from person to person asking for them to save the life of my Savior.  I would have tried to explain to them that His ministry is just beginning and He has so many more people to reach.  I would have explained that He had done nothing wrong- only good to those with whom He came in contact.  They were all frightened by the words He shared because they did not understand.

I know I could not have watched as He was beaten, mocked and stoned.  I would have been there to support His mother, Mary, even though I wanted to run and hide from the horrors I was watching unfold before my eyes.

I would not have been able to watch as the soldiers nailed my Lord to that cross.  I know this because I close my eyes and cover my ears during movies when I hear the hammer hit the iron nails and shutter at the mere thought this happening in real life.

It would have been difficult for me to sit and do nothing as the soldiers continued to mutilate His body and even cast lots for His robe.  The man who knew no sin was dying, for me.  He died for all men but most of all He died for me.

To be the woman my resurrected Lord chose to be the first one to appear before is beyond my comprehension.  Mary Magdalene was given that honor and an honor that words cannot express.  When my friend, Karen Chadick, sings “I Have Just Seen Jesus” all I can think of is – I am the one lying face down on the ground, unable to move or to speak of the one whom I had just seen.  Mary Magdalene would have helped me up and I would have followed her as she delivered the message to the disciples – “I have just seen Jesus, He is alive”.

Mary Magdalene is not mentioned in the Bible after this glorious day.  She fulfilled her assignment just as Jesus instructed.  She was never the same just as I have never been the same since I met Jesus, the one who died for me. 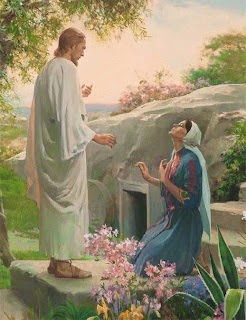